Frog on a Bike Ceilidh Band

Frog on a Bike has over 100 years of musicianship  between them and look forward to entertaining you at your ceilidh, barn dance, wedding or festival.

Our repertoire is rooted in English folk music, both traditional and contemporary. We also boast two very talented tunesmiths of our own.

However, plenty of Scottish, Irish and sometimes even French tunes are usually thrown into the mix just for good measure. We can also muster up a fine bit of harmony for some folk songs too!

All in all, we strive to play foot-stomping tunes with verve and vigour. We like to have as much fun up on stage as you do on the dance floor, so we can guarantee that you will not be able to resist getting on your feet. 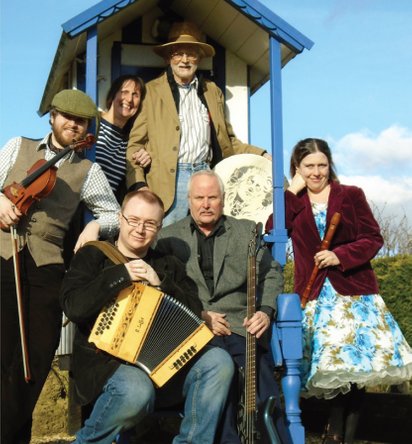 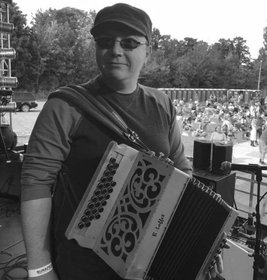 Tom has been involved in traditional music and dance since the age of ten, when his primary school performed at the Whittlesea Straw Bear Festival. He took up the melodeon aged 12 and has played for several Morris sides – currently he is the lead musician for Chiltern Hundreds North West Clog Morris and is a founder member of Rockingham Rapper.

He was a New Roots finalist in 2005 and has driven the Straw Bear several times.

Tom composes many original tunes, most of which we play on a regular basis. One of Tom's tune's, "The Well-Hung Turkey", has been in the repertoire of celebrated ceilidh band Random for many years.

Sarah has been writing tunes and songs ever since she learned to talk. She sung in four different continents with the National Youth Choir of Great Britain in the 1990s, and also played in the now-defunct folk duo Full Tilt before joining Frog on a Bike.

She is also the lead musician for Rockingham Rapper, and can play Speed the Plough in 17.5 seconds – with an award from Whitby Folk Week to prove it!

Sarah wrote our May Day song "Morning Queen", which you can find on our album 'Velocipede', and her most recent tune "Three Miles to Gamlingay" has just made it into the repertoire. 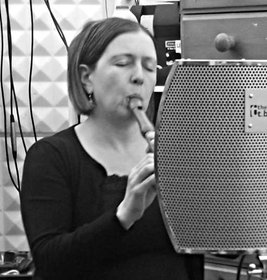 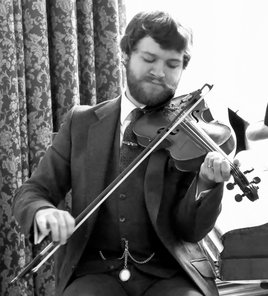 Tim joined Frog in 2014, after 7 years with the Cambridge University Ceilidh Band.

Classically trained to Grade 5, Tim has exclusively played folk music since, with particular emphasis on the English tradition. The main influences on his style being musicians such as Fairport Convention's Chris Leslie, Dave Swarbrick and Ric Sanders, to name but a few.

Away from the band, Tim is a Violin Maker, Morris dancer and musician for Granta Blue Morris, having also danced and played in the past with Cambridge Morris Men and Old Speckled Hen Morris respectively. He is also currenty a musician for Ely & Littleport Riot Border Morris.

Phil has been playing in and around Cambridgeshire since the early 70s, mostly in folk or folk rock bands, duos and trios.

He will have a bash at most stringed instruments (except for fiddle; he leaves that to Tim) plus keyboards and even a Bb tuba !!!

Phil is semi retired now, so if not playing, you'll most likely find him gardening or at a fishing lake near you! 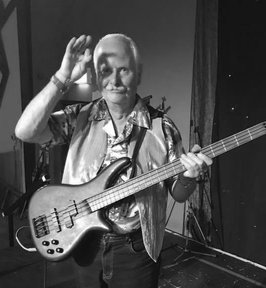 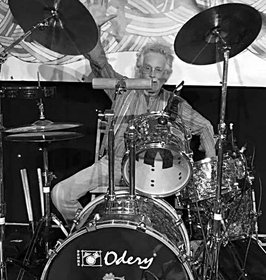 Den is a founder member of Frog on a Bike and started his drumming career in the Boys Brigade at the age of 12.

He’s been involved in the folk scene for many years, ran the Spalding Folk Club and once had a long bodhran solo immortalised on BBC Radio 2's folk show as their introduction to a broadcast from Revesby Folk Day.

As well as being our intrepid drummer, Den is also our resident artist. Our album covers and our signature band cartoon are all the work of his talented hands!

Lyn is our resident caller, but also organises all our gigs and makes sure that the band are ready to make your occasion a perfect success.

Lyn was also involved with the running of Spalding folk club. During their annual Tulip Parade, she would persuad tourists to dance in the street while the folk club played tunes on the folk bus.

At our gigs, once Lyn has given our dancers a chance for a breather, you can normally find her joining in with the rest of the band on autoharp, maracas, triangle or tambourine for our between-dance sets. 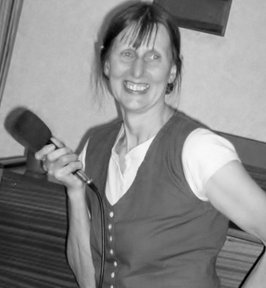 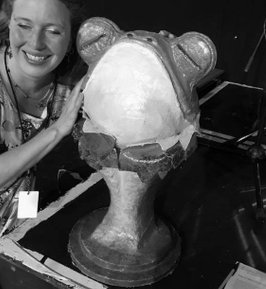 Froggy (renamed umpteen times by small children at weddings) is the last survivor from a 1920s Leeds Theatre production of Toad of Toad Hall.

He is made of rag and wood and originally held a flame on a stick which ‘lime lit' the stage. Rescued from the abandoned theatre and lovingly renovated, he is now as much a member of the band as the rest of us.

He has been on stage for longer than we have, so as you can tell, he is very professional!

From time to time, we call on friend's of the band to stand in for one or two of us at a gig.

Be that for a private function, or as part of a festival line up, here are our regular "deps":

For most festivals, but not all, we generally field a slightly different line-up to our regular private functions.

In addition to Sarah, Tim and Tom, we are very proud to work with Edwin Beasant & Heather Sirrel on such occasions.

Edwin and Heather, of The Ironmasters and Pilgrims Way, form our stand-in rhythm section for most festivals.

They very ably stepped up to the breach when we played Todmorden Folk Festival 2019 and we haven't shaken them off since!

We just love having them on board! 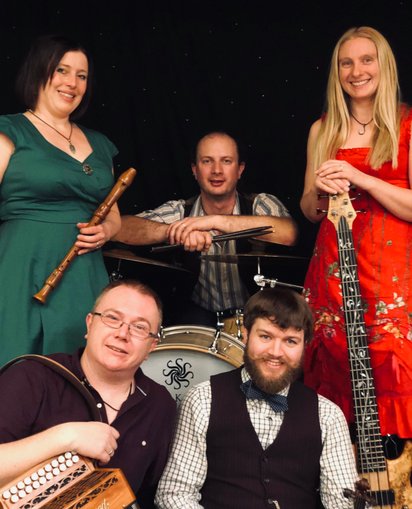 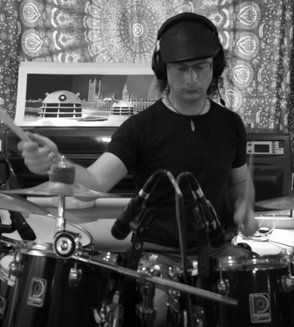 Edwin is a musician with a varied and possibly dubious background, having been brought up in a Morris Dancing family. Steeped in the traditions of England, he sought further influences, finding inspiration in the continental and trans-Atlantic traditions, as well as through Motown and soul.

A compulsive multi-instrumentalist, Edwin plays many, indeed most things, including some that haven't been invented yet, but is best known as a talented and inventive box player with The Ironmasters and for his stint as the drummer with Jabadaw.

A hugely empathetic accompanist, his greatest strength is in instinctively bringing out the best in other people's music with exactly the right textures and rhythms.

An inveterate folk-funkmeister, Heather brings her own particular style of groove to the party.

Having once been crushed by an avalanche in the 'J' section of Our Price, a strange blend of Bert Jansch, Jamiroquai, Jethro Tull, The Jacksons and Janice Joplin has influenced her music ever since.

A highly experienced cross-genre player, Heather braves uncharted territory of the lower frequencies for several bands. When she's not keeping it on the one she also happens to be a dab hand with a soldering iron. 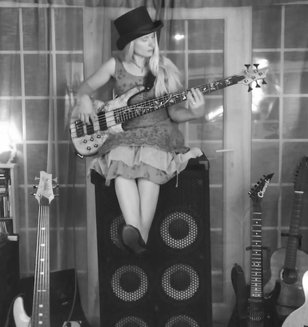 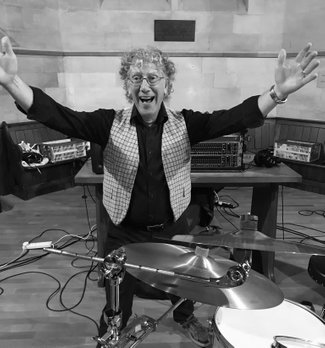 Paul is our go to drummer if ever Den can't make a gig. He has provided the

driving force to our rhythm section on many occasions, including when we played Towersey Festival in 2018. We just love how folk-rock we can get when playing with him!

Paul also occasionally joins us as part of a festival line-up. Be that as one of our usual 5 piece, or as part of our new 6 piece big band. We will be debuting this special big band line-up live at Folk East 2020 (Covid-19 Postponed TBC)

Along with being a founder member of The Bolton Iron Maiden, Paul has a mightily impressive CV, which you can find out more about on his website: http://paultjoneill.com/

Paul or Stephanie Martin are our go to callers if Lyn can't do a gig or if we aren't playing with a well known caller at a festival.

Both Paul & Stephanie are very expirenced and call regularly with variouse bands, but particularly with the Cambridge University Ceilidh Band. 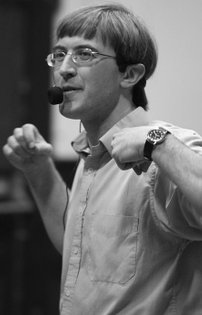 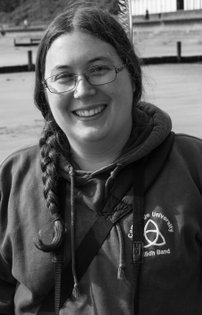